Schematic diagram showing crystal structure of Na+K+-ATPase (PDB 4RES) with a bound cardiotonic steroid (bufalin). ​
Background
​Cardiotonic steroids are common steroids that have been co-opted by many plants and animals for use as chemical defense. These steroids have one molecular target: the Na+K+ATPase, which is an important protein found in the membrane of all animal cells. By inhibiting these proteins, cardiotonic steroids can cause a slew of physiological irregularities, especially with regard to cardiac contractility. Despite this toxicity, many animals have evolved resistance to these steroids through target-site insensitivity of their Na+K+ATPases and can consume large quantities of cardiotonic steroids with no ill effects.
Genetic sources of target-site insensitivity of Na+K+-ATPase (in silico)
Our evolutionary analyses of the Na+K+ATPase gene family (ATP1A1--4) has revealed remarkable convergence, divergence, and parallelism in the molecular mechanisms by which many resistant animals have achieved this novel protein function. In all known cases, target-site insensitivity has been traced to a handful of amino acid substitutions at a key region of the ATP1A gene paralogs. By surveying the ATP1A gene family across tetrapods, we've compiled a rich body of comparative data that we're using to map the evolutionary landscape of this adaptation and assess the extent of parallelism, convergence, and divergence in resistance-conferring amino acid substitutions. See works published in Proceedings of the Royal Society B and Current Biology. 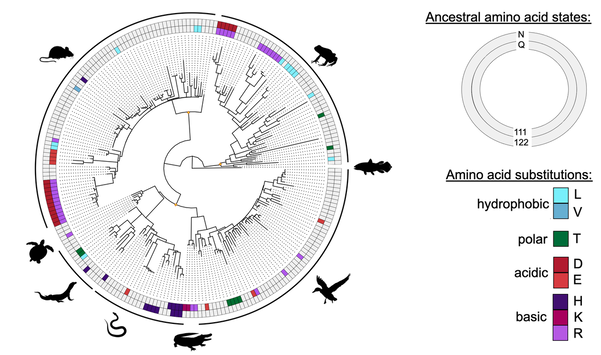 Amino acid substitution patterns at two key sites relevant to conferring cardiotonic steroid resistance (positions 111 and 122) in the ATP1A1 gene across tetrapods. ATP1A1 codes for the α-1 isoform of the Na+K+-ATPase.
Functional characterization of Na+K+-ATPase mutations (in vivo)
I infer the functional significance of mutations in vitro by analyzing genomic evolution in combination with protein engineering experiments. These studies have revealed a lot about the genetic underpinnings of adaptations, including more broad-scale insights. For example, we found that the phenotypic effects of resistance-conferring mutations depend strongly on the gene sequence in which they occur. Whereas one mutation would give resistance to the protein of one species, it would have a completely different effect in that of another. Upon close examination of a few case examples, we were able to show functionally that full adaptive transformation of the proteins was only possible when a combination of interactive mutations where present, not just those that confer resistance (see work published in Current Biology).

Such non-additive interactions between mutant sites in the same protein (intramolecular epistasis) can dictate the selective accessibility of alternative mutational pathways. A big implication of this is that the accumulated history of substitutions in the past for a given animal may influence the allowable mutations in the future. The accessibility of particular adaptive outcomes could thus depend on ancestral starting points, and ultimately, this can help explain the molecular underpinnings of divergence and convergence in phenotypes. My most recent work is focused on experimentally testing the role of such contingency in the adaptive evolution of vertebrate Na+K+ATPases. By combining site-directed mutagenesis experiments with ancestral protein resurrection, I am experimentally reconstructing the evolution of target-site insensitivity of Na+K+ATPases in vitro to identify the exact historical changes in gene sequence that have contributed to the context-dependent effects of mutations.
Physiological implications of alterations to Na+K+-ATPase.
A lot of my early work in this system involved investigating the physiological implications of cardiotonic steroids resistance, particularly in snakes, which were an ideal vertebrate model because there are many resistant species that feed on cardiotonic steroid-defended toads. The culmination of this early work, resulted in the identification of many interesting physiological patterns. For example, we found that resistant snakes with a high percentage of toads in their diets had enormous adrenal glands (see work published in Journal of Zoology). We later found that these snakes produced high levels of circulating aldosterone, which is a steroid hormone produced and secreted by the adrenal glands and which signals the expression of Na+K+ATPases (see work published in Gene and General and Comparative Endocrinology).

Future directions (in vivo)
I plan to bridge the gap between my work at the molecular scale and the physiological scale by adding an in vivo layer of experiments to my in vitro-based research. The culmination of my research has provided a strong foundation at the molecular scale that makes this experimental system perfectly suited for making clear  “bottom to top” connections, which is something that’s very rarely demonstrated.

By incorporating the latest genome editing technology (CRISPR), we can consider phenotypic effects of mutations both in vitro and in vivo to reveal new features of adaptive mutations that were previously inaccessible.